A hogshead, a firkin at a time

Had a good one? Tell us about it here - and don't forget - we like pictures!
Post Reply
54 posts

You sir are a martyr to the cause, I applaud you

Never thought I'd see anyone doing it for real! Good man!

"Reality is that which, when you stop believing in it, doesn't go away" - Philip K. Dick

Very impressive! That should be a spectacular beer when it's done, look forward to hearing about it

The epic thread that keep on giving

Ooh, thanks all for your kind comments!

I'm done with the clean, prep and general barrel readiness now.. It took some time to steam sterilise (That's a lot of volume to fill and heat!) but it's all ready now. I'm off on Saturday to rack off from the 5x 60l FV's that we made the beer in. More pics to come.

When the time is right and it's matured appropriately I'll relay a few bottles back to the UK for some independent tasting and review.. it'll be good for me to get a cadre of JBK regulars to provide their feedback and of course - I'll have plenty of beer to spare.
Top

bellebouche, this is a great thread. Looking forward to more pics and I hope it turns out well for you. Very exciting.

I took a few snaps during the prep to give you an idea of how I prepped the barrel. After the initial soak with a 100% fill I pumped off the contents (lightly blush pink!) and then set about with a proper rinse. Just using a power wash lance I was able to clean a lot of the bigger chunks of tartrate crystals off.

Next step is to dissolve the balance of the tiny crystals and to go some way towards sterilising the wood. It's never going to be 100% clinically clean but I certainly dont want any off flavours to develop.

A short blast of steam will do both jobs.

Here's my rig. My 10kw kettle burner, a 10 litre industrial pressure kettle... hacked the pressure relief valve with some silicone hose and then a copper 'steam wand' to disperse the steam, inside the barrel. I bunged the exit with a towel to keep the heat and a little pressure and the temperture slowly climb. All the while the steam condensing on the inner surface and running down the walls.


It struck me that it was time to teach the barrel a lesson. It's wine days were OVER, time to start thinking beer. I christened it with a pint of my recent roasted-rye bramling cross beer. The pint glass gives a bit of scale... lots of beer to come. After a while.. I'm there. A slow rise up to boiling for the inside of the barrel and I'm done. Flipping it over and lurid crimson wine-like guts were spilled all over the terrace. Excellent!

What I can't get over in any of these pictures though are the smells. Quite astonishing. Christmas pud, berry fruits, vanilla... certainly some oaky smells and the hot wine like spiced wintertime vin-chaud. It was all overpowering. I was actually stood there... sipping my pint and mentally trying to envisage what the finished beer would be like. Kicking myself for not doing this earlier and really rather impatient for the final result!

So, that's it. Fill-it-up day tomorrow. We should have enough volume to brim it. I've made 2 litres of a thick dark belgian candy syrup which Ive got up my sleeve to kick off a secondary barrel fermentation and dry the beer out if it's a bit full bodied. It's not definitive yet and I'll make the call on the day. I've got five individual FVs to sample and decide upon and should have enough latitude to blend what goes into the barrel at this stage.

Some regular beer will get bottled tomorrow as a 'negative control' - I'll sit on that for the same time as the barrel aged beer just so I know what characteristics are truly given over to the finished beer by this barrel.
Top

Fantastic post, thanks for sharing! I'm excited to see the end results of this. We have a contact in Bordeaux who has a clear out of his oak barrels every 2 or 3 years, he did remark on one visit that he has trouble getting rid of them!!! The first thing I thought was cut them in half ans sell them through garden centres but that was before I began brewing... hmmmmmmmmm

This is one of the most interesting threads I have read for a while - not that anything on Jim's is not interesting, of course! - I would love to be doing something like this. How is it turning out at the moment? Also, where can I get a barrel in the U.K.?

Ahh... it's been in the barrel now for a few months. I'll let it sit out the summer and then bottle off some in mid September I think.

I took a 'negative control' bottling along to a brewers meeting here a few weeks ago - this was just a few bottles of the base beer before it has had the benefit of the barrel ageing. It went down exceptionally well and I had some rave reviews ringing in my ears for a few days - very gratifying.

Current thinking is that I'll bottle it off 40 litres at a time and keep on topping the barrel with that amount to replenish it and keep it full - that way I can continually draw a barrel aged beer and sample different bottlings over time. It's just an idea - I'll not make my mind up until I taste the real thing in three months time.

I did take some pics and notes at the barrel fill - I'll update this thread with them in a week or so.
Top

Any update on this?

Best thread I've read on Jims since I joined up. Look forward to updates!
Top

That's because.... I was letting time do what time does... tick away!

So, two years in the barrel, the results are simply sublime. 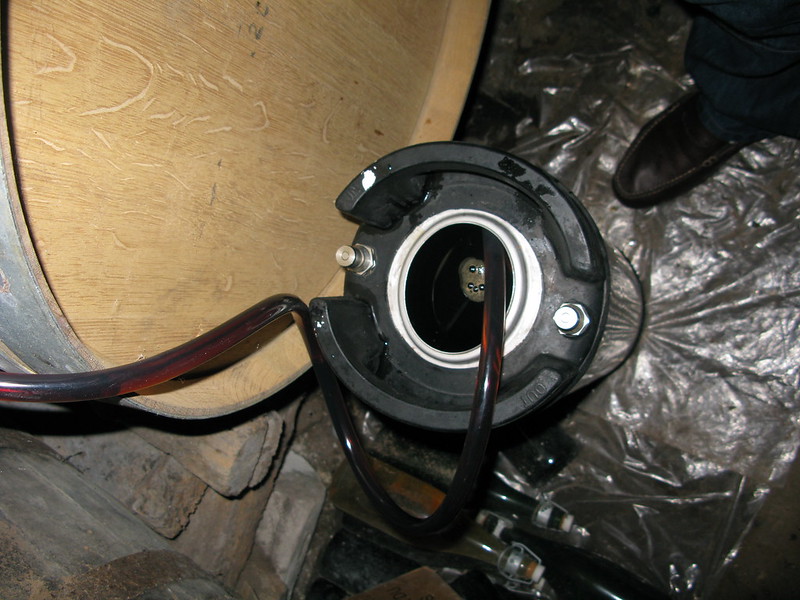 Taking the first keg by adrianfoden

I took that keg to the annual French amateur brewers meeting last weekend - it was a sensation.

Pics and tasting notes to follow in a few weeks.
Top

A most enjoyable read thank you