Had a good one? Tell us about it here - and don't forget - we like pictures!
Post Reply
17 posts

Mashed for 75 minutes at 67 degrees C, raising over 7 minutes to 76 degrees C then mashed out for 10 minutes at 76 degrees C. Sparged (badly, as tried a new method that was a bit naff) with 5 litres of water at 78 degrees C.

Then supposed to have been a 90 minute boil, but ended up 80 minutes when an extra alarm from my app (for some reason I'd set the protofloc to 15 mins, I usually put it in at 10 mins with the wort chiller) confused me.

Should be fine still.

Ended up with 22 litres into FV, with an OG of 1.044. Oh, I also used more treated tap, less reverse osmosis water. A mistake I won't repeat, as with an almost identical grain bill my Detectives Ale had an OG of 1.050.

Lovely golden wort, smelled delicious (as did the hops to be honest).
Top

This finished at an FG of 1.010, giving me an ABV of 4.4%, so pretty much spot on. I've yet to bottle it though (my wife decided she wanted new bottles this time around, so waiting for them to arrive) but took a pic of a sample. Flavour is nice, but not quite as nice as the Detectives imho. I couldn't tell you how close it is on Holden's Golden Glow as my wife can't remember either... She does however say that this one is yummy. I plan to prime this for 1.8 volumes of CO2 though, as the 1.5 vols I did the Detectives at is a bit too flat.

Oh, my darling wife has renamed it. It's going to be labelled Captain Carrots Gloden Glow.

It's a Terry Pratchett Discworld reference: https://wiki.lspace.org/mediawiki/Glod. She likes to name most of our beers with this theme.

Vetinari Pale might be my next inspired by this
Top

Don't let me detain you?

I have a few recipes planned with Discworld names too. Like Saison De Moist (last Saison I made we named Saison With Avec, the one before was Saison De Quirm... Yeah, we like Saison. lol), Goblin's Glod (bet you can guess that one...) and one of my first AGs was named Om Smash.

My nest brew is probably going to be a Patersbier (Greg Hughes recipe), so I still need to come up with a name for that at some point...
Top

How about calling it "Hallowed", a Patersbier named after the instruction in the first line of the Pater Noster:


Some ancient Catholic wrote:"Our father, who art in heaven, hallowed be thy name ."

I'd argue that designing a recipe that leads to mild intoxication is art deserving of heaven ...

and therefore ought to be called "hallowed".

Not bad for an atheist.

Who tend to know far more about religion than those who claim to be religionists. Which of course is why they are Atheists. For the avoidance of doubt I am an Afairyist and Aunicornist too.

Thanks, and ahead of you. One of my early brews was a Youngs Raspberry and Mango perry kit, which tastes vaguely of fruit so got named "CMOT Dibber's fruit flavoured beverage", as in it may have passed some fruit in a field at some point....

Laripu wrote: ↑
Thu Feb 08, 2018 5:27 am
How about calling it "Hallowed", a Patersbier named after the instruction in the first line of the Pater Noster:


Some ancient Catholic wrote:"Our father, who art in heaven, hallowed be thy name ."

I'd argue that designing a recipe that leads to mild intoxication is art deserving of heaven ...

and therefore ought to be called "hallowed".

Not bad for an atheist.

Nice idea, but not really in keeping with the Terry Pratchett Discworld theme.

I need to research the name of the time monk chappy in the books maybe....

orlando wrote: ↑
Thu Feb 08, 2018 8:17 am
Who tend to know far more about religion than those who claim to be religionists. Which of course is why they are Atheists. For the avoidance of doubt I am an Afairyist and Aunicornist too.

At the risk of causing anger, I'm Pagan, and agree, but would add that Pagans tend to know more about Christianity than many alleged Christians do. I certainly found this to be true with my mother, who once sat me down with a lay preacher to try to convert me.... It failed from her perspective, I actually left the poor preacher questioning his beliefs (to add, I was 100% atheist at the time).

I have a theory as to why this is the case, however this isn't the place for it as it would upset people for sure.
Top

Heretic !!
Next you'll be telling me you don't believe in dragons. You're going to end up in Mordor, inside Mount Doom.

We know that fairies and unicorns and dragons are real because of the totally and completely real photo below. And then there's the first person testimony of Saint Disney.

Now go eat a mermaid and sin no more. I hear they're delicious with tartar sauce. (Or tartare, in UK spelling.) Like a cross between cod and pork. 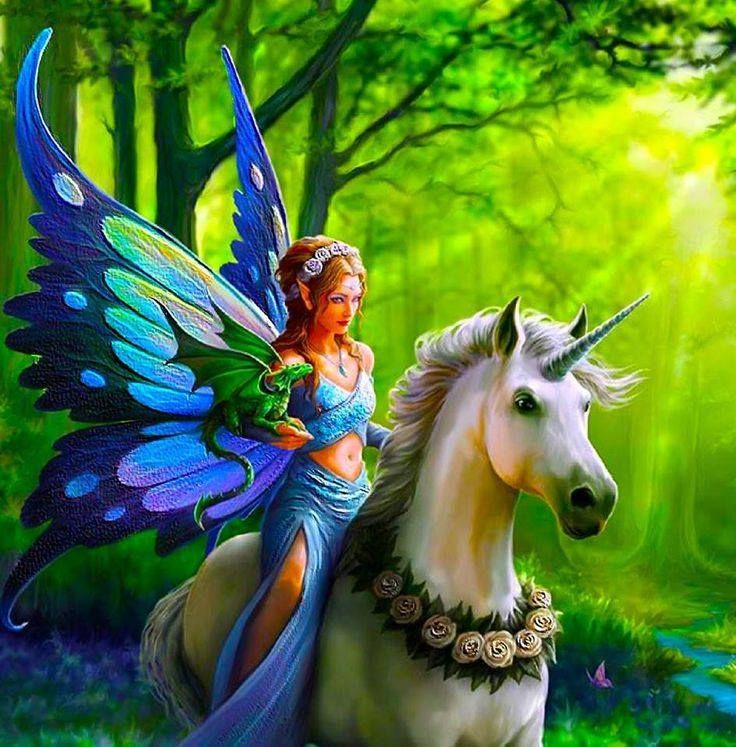 You didn't write the script for the Tentacles of Doom episode (Series 2) of Father Ted did you?
Top

I just used logic against his faith, logic won, so I guess his faith just wasn't all that strong in the first place.

I would NEVER do this to a person usually, I believe quite strongly that people are entitled to their faith and/or beliefs so long as it doesn't harm others. However I felt I was within my rights on that occasion given as he was there to evangelise to me and convert me, I was just returning the favour.

The final name my wife gave this is "Captain Carrot's Gloden Glow".

Poured the first proper bottle today, and have to say I definitely seem to have sorted the haze out with the faster cooling of the wort. Poured a lovely clear golden colour, light foamy head that quickly vanished leaving just a few bubbles on the surface (the commercial Golden Glow does this too). Thin body, pleasantly flavoured and only light bitterness. It's improved considerably with it's time conditioning, the hops have mellowed nicely. It's not the most amazing beer ever, but then it wasn't meant to be. It's an easy to drink session beer. I have to confess, I prefer fruitier tasting hops (like the Endeavour, or EKG), but it'd be boring if I didn't vary. lol