Had a good one? Tell us about it here - and don't forget - we like pictures!
Post Reply
17 posts

Another brew day just finished, with 23 litres of delicious smelling golden wort, with an SG of 1.045, in an FV. Boy am I tired though.

Heck of a boil, massive evaporation and serious foam.

No cheating this time though, I stirred it in rather than using anti-foam.

Nice golden wort for sure, fair bit of break material though that flat refused to settle out or be filtered out.

Needless to say, it smells seriously fruity, gorgeous! Confession, I've not made an AG with this many, or quantity, of hops in it before. Seeing them all in the boiler after draining it was bonkers! Like sprouts in a pressure cooker. lol

Anyway, pitched 1 packet of re-hydrated Mangrove Jacks M36 Liberty Bell yeast @ 18 degrees C (coolest I have ever pitched), as this is my go to for British style beers now. It's VERY dependable, and produces a lovely beer.

Man, I so want this to be ready and in a pint glass sat next to me...
Top

Liking your late hop additions, but why such exact amounts?

What was your final OG and bitterness?

Ahhh, I see I caused confusion by putting my OG in the first paragraph, and putting SG.

Bitterness, well depend on what software you ask that does... lol

Exact amounts are just a habit of mine, I weigh my hops on jewellers scales (bought specifically for brewing use, before anybody says anything...lol) and stick to the exact amounts BIABacus gives me when scaling a recipe.

If it was hard to get things exact I'd round up or down, but tends to be that I can hit the exact amount first time.

The down side, if you can call it that, is eventually I just have to do a brew using up any left overs.

If this comes out tasting as good as it smells, I'll be a very happy chappy, until my wife guzzles it all. lol
Top

I'm easily confused and easily led, tempted to add some Citra to my Malt Miller order!

I've got some scales like that, that I use to weigh out my water treatment additions, does look dodgy when weighing out the gypsum.

Should be a nicely balanced pale ale then with that bitterness.

By the way, that's not a lot of hops

No I know, I have a copy of Brew with THAT famous US IPA recipe... lol

Just a lot for me, as I don't usually brew anything this hoppy.
Top

How much beer are you sitting on?? You brew often, I am jealous. Very jealous!!
Top

Uhm, yeah, a bit. lol Lately I have been brewing about once per week, trying to build up a stock of nice beers so we have more choice, but also so at least some of it gets time to properly condition (my wife hovers, waiting for the PET bottles to get firm, then she's in there... lol She's learning though that a firm bottle doesn't actually mean it's ready now, oh and that drinking it straight from the fridge often means you are drinking effectively flat beer without much flavour..). I tend to give some to my father in law too, he loves a nice ale. I'm also trying to brew plenty of British style beers whilst the weather is cooler, that way I'll have enough to last me until next winter comes around again.

I'm probably going to have to pause for a few weeks now though, I'm running out of space to store the bottles in. The FV for this is sat on a mat on the floor at the moment, as where it SHOULD go on my FV shelf is currently occupied by about 40 bottles of bitter.... lol

I really really enjoy the whole process of crafting a beer though is the main reason, if I am honest. I also love seeing how they change character over time. Like my last Saison, I dry hopped it with mosaic, so at first it had a strong aroma and flavour of tropical fruit, but as the dry hop fades the grapefruit from the amarillo hops has become more and more apparent, along with a lovely honey and lemon after taste. Yum.
Top

Not knocking it, just very jealous. My wife and I have just had a second child, so no real time to brew at all (the first is only just two years old). I am finding that I am having to brew kits (heavily tweaked) and Turbo Cider. My goal is to make a beer (either ag or kit) every 6 - 8 weeks this year.
Top

My years of having very young children is happily in the past. lol Our youngest is now 9.

I do however have to brew around the needs of the family, as for the boil I have to put my boiler in front of the cooker. Otherwise the walls and ceiling end up dripping with condensation (literally). So I mash at the opposite end, lauter by draining the boiler rather than lifting the bag, sparge the grain still in the bag in the boiler (which is really nifty, as means I can fly sparge using an SS colander, and keep recirculating the sparge liquor from the boiler tap with a big jug). Then I put the lot in a bucket with a lid, move the boiler across to the cooker, remove the grain to a bucket where it can drain some more, refill the boiler with the wort and start my boil. As a plus, if I start in the morning I can take a break between the mash and the boil whilst we all have lunch.

I started out brewing mead (still do) which is a lot faster. I then tried brewing from kits, but to be blunt most of it didn't even taste like real beer. So I bit the bullet and switched to BIAB all grain. A good boiler system makes a huge difference though, I tried with just a big pan at first and it was too much work. Wife let me get an ACE mash tun boiler though, and it helped tons. The one turbo cider I made was lovely (if seriously dry and tart) for the first 2 months, then turned nasty, so I reckon that somehow it got infected. The fact you couldn't open a bottle without the yeast getting lifted off the bottom by the bubbles didn't help (CML cider yeast).
Top

Yea, I know what you mean. I dont drink cider all that often tbh, but will fancy some every now and again. I have the grainfather as a system (love it), a brew day normally takes about four and half hours (including cleaning the system), but find it difficult to do inside with the little one. About once every three months I ship my wife off to her parents and try to get a brew on. Although saying that, I did that last night (first day back at school today) and was far too tired to do anything. I did have a lovely bottle of Saison DuPont though!
Top

Just bottled this, at an FG of 1.010. 41 bottles filled nicely, so looking forward to drinking this one. 77.1% apparent attenuation from the M36 Liberty Bell yeast, so as dependable as always. Smells amazing!
Top

Well, last night my wife and I finally did a side by side taste test on this, comparing to a bottle of Hobgoblin Gold. We didn't do it blind, as our aim was to compare the flavour, neither of us cares that much about how it looks.

It pours with a very thin foamy head, which vanished almost as quickly as it appears, leaving just a few bubbles on the surface.

Goblins glod has the haze traditionally associated with my home brew that's only had a few days in the fridge (ie. chill haze), with only kettle finings used. Quite often this haze vanished after it's been in the fridge for a few weeks.

No cold crashing, no filtering, and bottle conditioned and primed.

It pours (carefully) with a huge, white, fluffy head that hangs around for quite a while.

I'm sure you can figure out which is which in this photograph:-

Normally I'd now move on to contrasting the flavours and mouth feel, but this time I can't. The reason been, they're identical. Same light mouth feel typical of a golden ale, and exactly the same flavours as far as we could tell. Decent bitterness followed up by a lovely hop driven fruitiness (maybe grapefruit and pineapple/stone fruit (I have trouble telling those 2 apart in beer) been the main ones?). Both delicious and refreshing.

So basically, whoever came up with this recipe hit the nail right on the head, it's spot on! I doubt Wychood use Mangrove Jack's M36 Liberty Bell yeast, but heh it worked. lol It's a true clone beer recipe.
Top

Thanks for the recipe. I tried this one on the grain father last weekend. My God the smell is good!

Will let you know how it goes.
Top

Regarding your flameout addition - what is your process? In a commercial environment it’s common to leave the flameout hops for 30 mins, then cast to FV. The hops essentially have around 30 mins plus 45-60 mins while casting as contact time. I replicate this at home, but wonder what others do for their flameout addition.
Top

Did this recipe myself recently. It’s spot on. 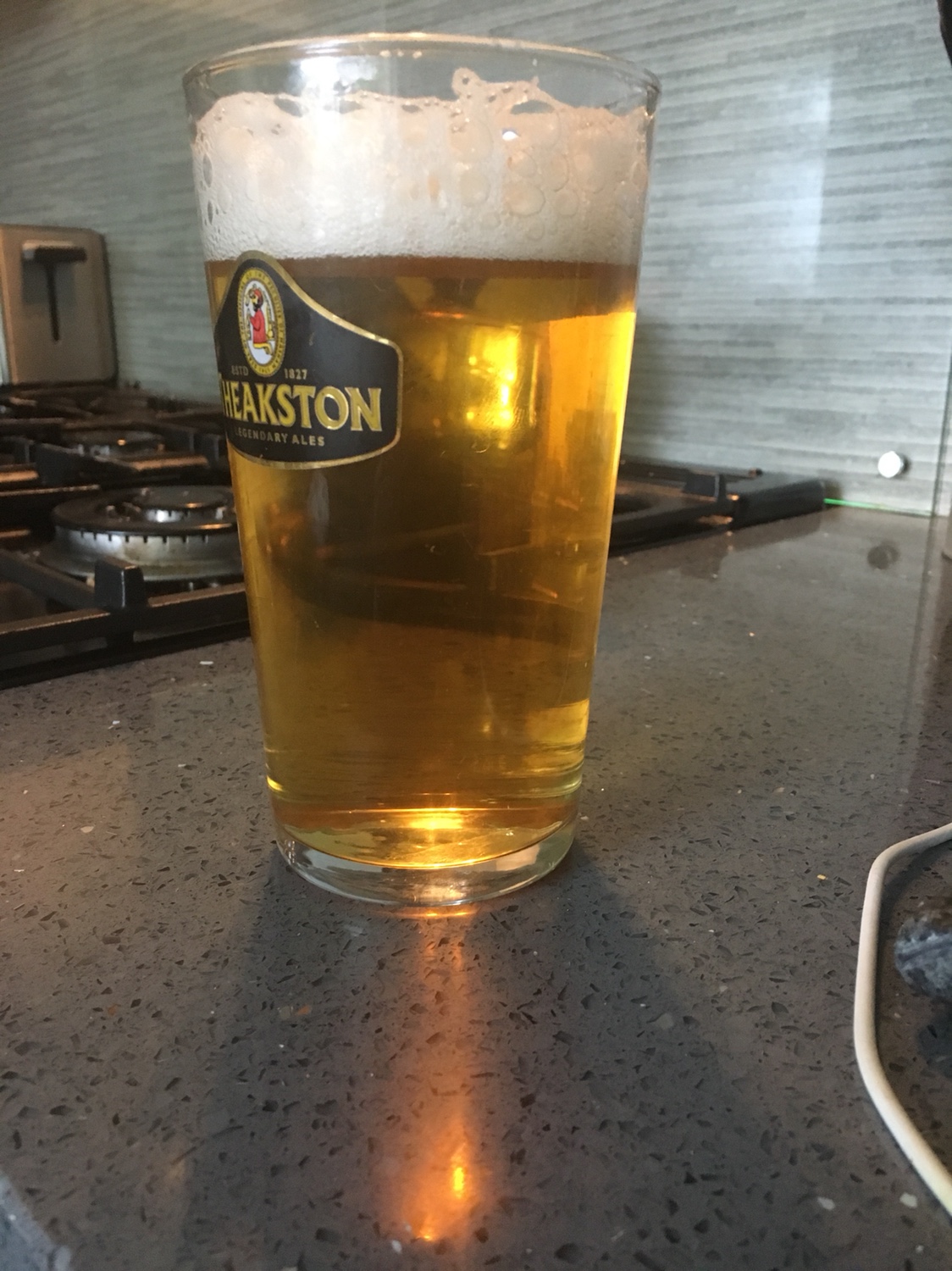