The forum for discussing all kinds of brewing paraphernalia.
Post Reply
28 posts

Any plans on using the pumps for step mashing? Do you think you'll use a lid on the kettle?

Thanks, TBH it all feels a bit slow, but then suddenly a part gets finished!

The underback will be pumped and include a PID-controlled element, so step mashing would certainly be possible. The MT is fairly wide diameter, so the grain bed shouldn't become too deep and compacted for a reasonable recirculation speed. I may also include a grainfather-style overflow to further control this. But that said.. my intention is more generally to use it for tweaking and maintaining temperature than making steps as such. Most beers I make are British styles, so mash steps aren't of any great benefit, and at these volumes would take quite a lot of power for a good ramp speed.

However, when making (say) a hefeweizen then I certainly do want a ferulic acid rest with a subsequent (and quite large) step. In this case I'll mash in thicker, then achieve most of the step by pumping in more pre-heated liquor from the HLT, before then tweaking with the underback recirculation (a kind of hybrid approach, I guess). The MT will be 100L so should be reasonably flexible in this respect, especially if not being used for very high gravity beers at maximum brew lengths.

The kettle works pretty well without the lid, if both elements (total 5kw) are running, but in the current situation (at least in winter) steam is a problem so i may need to duct it, in which case I shall use a lid with a kind of chimney. I've no qualms if that is so; DMS is much more volatile than water and isn't going to condense easily on a steam-heated lid provided there is sufficient chimney diameter to allow easy escape; this was certainly so with a previous kettle. Boil-overs can be a problem with partially covering though, so I'd have to juggle number of elements and chimney diameter. There are ways of controlling element power but I'd hope they weren't necessary.
Kev
Top

Thanks for the information, that sounds really good! I always wondered about that with some of these systems, whether you'd do a thick mash then dilute it for the higher steps, grain bed compacting etc. Do you think it be possible do to the first step in the kettle then pump it into the mashtun or would that compact the grain bed and knock out too much air? I even wonder if it's possible to do part of the grist in the kettle then merge them back into the mash tun. I'm very interested to see what efficiency you'll see once you get it dialed in.

Ach, I was wondering if you could put a lid on with partial venting until the last quarter of the schedule to maintain a rolling boil on one element to save a bit of energy.
Top

stunning shot of the underside of the HLT. great design. can i ask where(/if) you sourced the insulation slats from? need something similar myself and don't have a spare bed to trash
dazzled, doused in gin..
Top

The slats were just from Wickes, their planed whitewood. TBH in the past I've had problems with numerous pieces proving to be unusably warped once the pack is opened, but either they've improved or I was lucky in this case, as only half of one length was defective.


FermentedCulture wrote: ↑
Tue Dec 19, 2017 11:35 am
I always wondered about that with some of these systems, whether you'd do a thick mash then dilute it for the higher steps, grain bed compacting etc. Do you think it be possible do to the first step in the kettle then pump it into the mashtun or would that compact the grain bed and knock out too much air? I even wonder if it's possible to do part of the grist in the kettle then merge them back into the mash tun. I'm very interested to see what efficiency you'll see once you get it dialed in.

Yes stepping by infusion is one of a few common methods (others include rims and herms, decoction, and direct heat whilst stirring). For my hefe it is quite a big step, and so needs a fair volume adding; which implies a mash tun of a certain size, and reduction in liquor left for the sparge. But in this case, a thick ratio is fine for the ferulic acid rest, so that helps noticeably. The subsequent mash stage will be a much more normal ratio so extraction efficiency shouldn't be compromised (it wasn't with previous systems anyway).

I won't be doing any other steps so this simple method works well for me. However, I should mention that my design is based on mostly brewing normal British styles of beer and using well modified malts, in which stepping is not only unnecessary but IMO even slightly undesirable. If I often made styles or used grains for which stepping was more relevant, then I would have designed it differently - probably favouring upward recirculation through the mash and quite large RIMS elements.

TBH I'd steer clear of trying to pump the mash itself; many breweries can do this but our small homebrew pumps, hoses and standard mash ratios aren't usually conducive to it. You could probably use a grain bag to move the grain, but this is not something I've had reason to try for stepping. I'm not entirely sure what would happen if you were to use different (rather than additional) liquor for the different steps. I suspect if there were more than one or two steps then quality may become an issue and the water treatment would be quite compex, as the wort became more like water with each step.
Kev
Top

Thanks for the answer, looking forward to brewday!
Top

How're you getting on with this beast?
Top

Not too badly, thanks. A few delays with small orders, but the MT is now finished, at least to a stage suitable for batch sparging.

The false-bottom needed some support legs, and I wanted to countersink the screws used to fix them (so as not to interfere with stirring or scooping out the grain). As the metal is quite thin I decided to press (rather than drill) the countersink recesses by tightening a larger countersunk bolt-head on one side of the sheet into a countersunk cup on the other side. Of course that left dimples on the underside:

The intention had been to use chubby legs and simply countersink their top. However.. such chubby stand-offs/spacers were reasonably expensive, so to save a bit of cash I countersunk some washers to act as cups (see inset) and then just used cheap threaded-rod connecting nuts for the legs:

Possibly overkill, but I've tried this method of sealing the false bottom & pot before and quite liked it; there is hardly any difference in cost.

The end result seems pretty reasonable, the screws are flush so if needed the false bottom can be scraped to empty/clean or unblock without any snagging.

I used slotted heads for the removable screws as they're easy to slide/wipe grain debris out of.

For the outlet, I opted to go for a flange screwed to the underside of the base (Vossy style, for those who recall). Rather than have the wort passing through various joins and so on between layers in the sandwich base, I dimpled the inner skin around the hole, then filled the void with J-B Weld (this is the underside of the pot base): 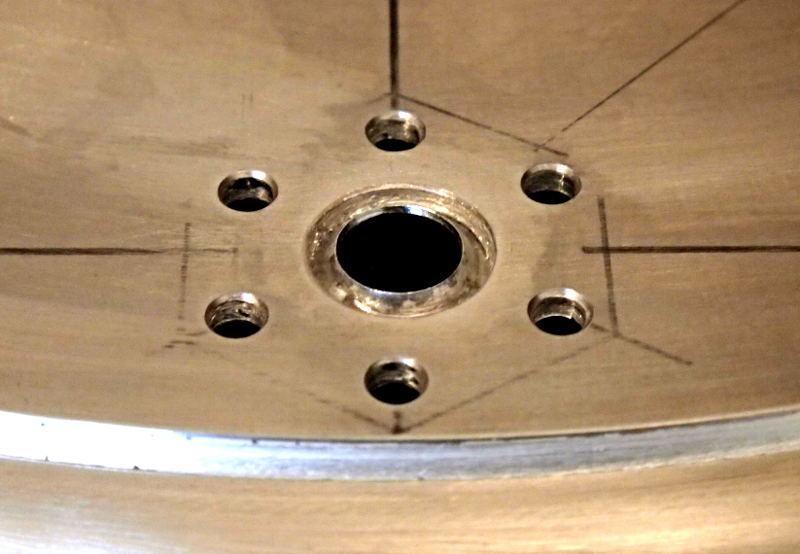 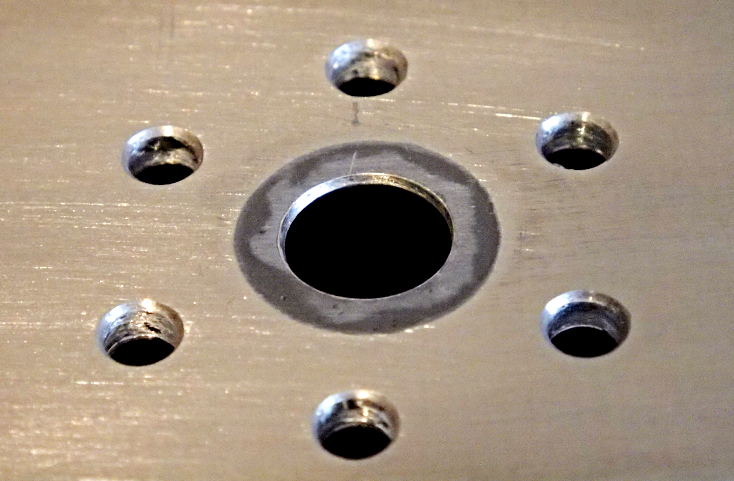 I had a couple of 1/2" BSP taps from a past project, so decided to make my own flange from a bit of 316 stainless hex bar. I needed the use of someone's pillar drill, but otherwise it went surprisingly smoothly, and the hex shape was fairly easy to hold and mark out: 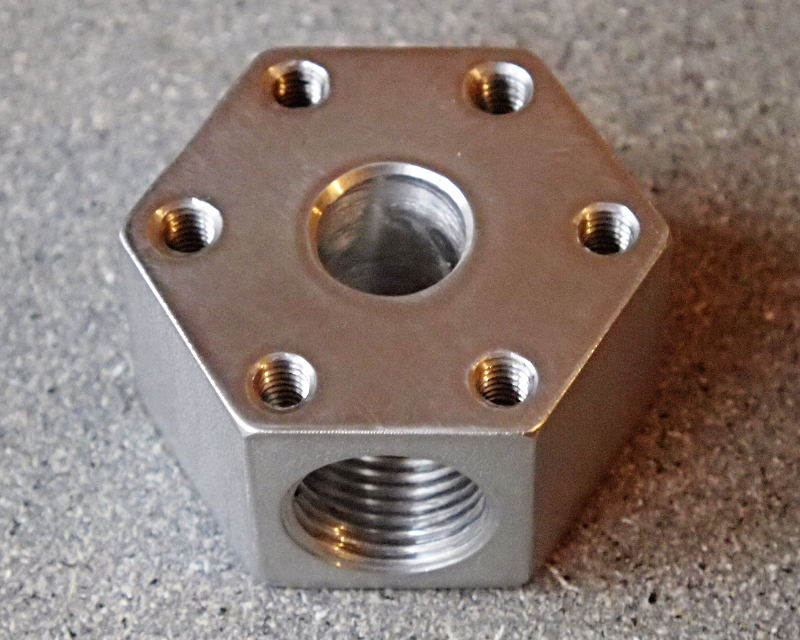 The drain was located towards one flat edge of the case, so that it can be tipped easily to aid draining. The valve's nut was replaced with a long connecting nut (and a couple of small locking screws), to effectively extend the shaft a bit; a handle based around a hex socket will be plonked on for brew days. 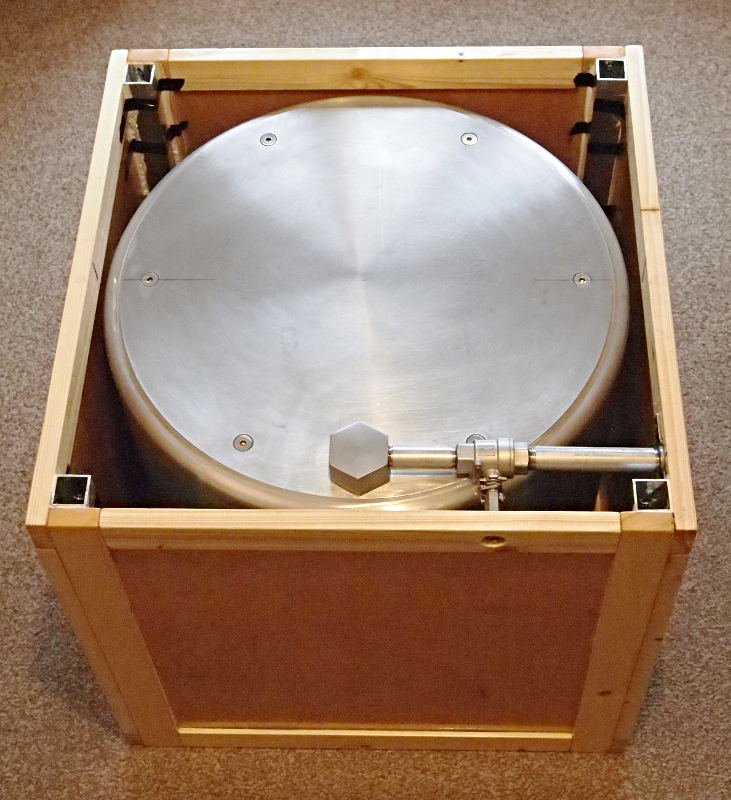 There is an inlet near the top. It has a female thread inside the bulkhead, so hoses etc can be connected to direct the sparge liquor (or in future, recirculating wort) onto the grain:

The case was filled with foam and a ply base was screwed on. I need to sort out hinging the lids so they'll store inside the kettle, and i shall make a valentine arm for fly sparging, but essentially the system should be operational now. There may be a controller, recirculation, sparge arm, and an underback arranged later, but there is no particular hurry, or even need, so it could be quite some time (if at all) for those refinements.
Kev
Top

Kev888, its so good to see your innovative design ideas matched up with your knowledge and workmanship. In these days of 'out of the box' plug-n-play brewing systems the home made brewery is becoming a rare thing. Pls keep up the good work. Its a joy to see.
Top

Thanks for the kind comments. I should probably point out that this new-build is of course unproven, I don't anticipate any great problems as most functional aspects are relatively normal, but only time will tell. Hopefully there will be time to test it in anger soon.
Kev
Top

Heh, at this stage the controller is just me, a hand-held thermometer and the wall-socket plugs/switches.

There isn't actually very much to control at the moment, all very easy to do manually, so the controller will be a later addition once things are all finalised.

TBH the plans for that aren't very complex. Aside from a couple of pump switches, it will mainly comprise a temperature controller and timer for the HLT, such that it can start and/or reach a set temperature without me being there. There will also be a selector switch to avoid having to swap plugs for HLT and kettle, and/or to prevent all elements accidentally being run at once (since the kitchen power supply isn't up to that). Possibly also a simple warning and cut-off for if fly sparging levels crept up unnoticed.

There 'may' be a heated underback for optional mash recirculation, and if so there will definitely be a PID and controls for that too. But I rarely brew styles that would benefit from step-mashing, so it would mostly just be an aid to consistency - which isn't usually too much of a challenge with these type of volumes. So not yet decided if I'll go there.

It is possible that at some point I shall compliment this with a very much smaller system for frequent small brews (trials of recipes etc). If so, then that would be a lot more automated in order to fit around everyday life - probably programmable, for different processes to be saved and loaded etc.
Kev
Top

Don't know what you do for a living mate but give it up - you're wasted doing anything other than brew builds. As the eldest daughter would say - awesome!!!
Top

Thanks! Though sadly I doubt there's a living in this, especially with all the mass-produced braumeisters and grainfathers etc around now. Perhaps just as well - I'd be sorely tempted, but the requirements, responsibilities and higher standards involved in professional production would likely rob my hobby of enjoyment.
Kev
Top
Post Reply
28 posts