The forum for discussing all kinds of brewing paraphernalia.
Post Reply
12 posts • Page 1 of 1

As my previous post I was considering buying two 50l thermos pots . However, I realise I have two unneeded 50l brew pots with taps and bazookas . Just need to insulate them. I’m sure blankets and old coats would be enough .. I’m sure I’ve tried it years ago. Any ideas ?

Some people use foam sleeping mats for camping.

Before I got a thermopot I used a cylinder jacket - easy to wipe clean and dry at the end of the day.
I brew therefore I ... I .... forget
Top

You can also get sheets of thermawrap relatively cheaply and insulate the vessel that way. The more the merrier and it’s cheap.

If you want to get more serious there is armaflex foam insulation which is the mutts nutts but pricey. Probably cheaper than the difference between a regular pot and an insulated one. You will probably want to protect the armaflex though as it can damage easily and absorb spills. The previously mentioned thermawrap fits the bill I think.
Top

This is on my to do list. What do people use to keep the thermawrap held to the brew kettle?
<JJSH> ~ https://jjshbrewblog.home.blog/ - my blog about stuff I'm brewing.
Top

There are many options of course, so there will now be a slightly tedious list. But FWIW these are my thoughts on those I've tried over the years:
I've not seen the other thread, but in terms of context:
For a boiler you want something that won't melt or go brittle with heat. But most things would improve the heat loss over a single-skinned pot - many times over with ease; even one layer of the foil stuff or thin wooden slats for example would make a big improvement. (If you use a gas burner then the options are more limited; heat shrouds and ceramics and the like).

For mash tuns, if it is a recirculating (RIMS/HERMS etc) then the demands on insulation aren't that great either; some insulation is good but it need not be huge. But for passive heat retention of mash tuns (my own preference), then IMO you can't easily beat properly thick layers of closed cell foam - be it flexible, two-part moulded or bent PIR.

Thanks for all the advice . What do you think ? 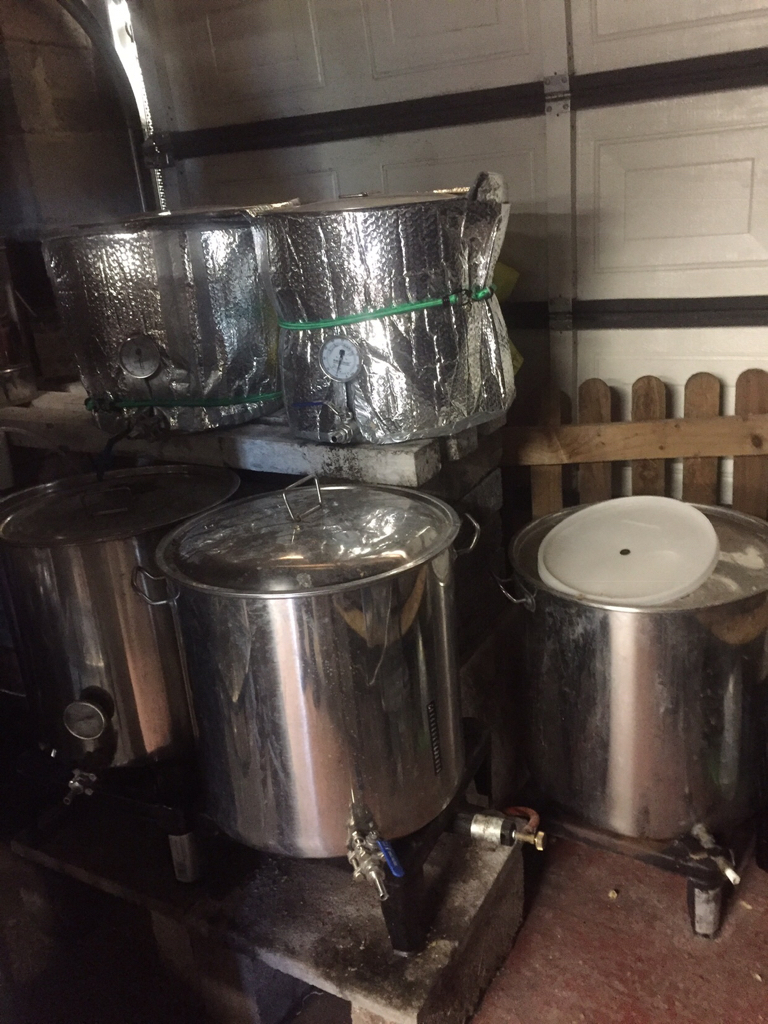 The only way to know is to test, really. It could be sufficient, but if there is no other insulation below the bubble-wrap you may possibly find the heat loss greater than wished. Though they'll certainly be much better than the bare pot alone.
Kev
Top

Armaflex from ebay, the 18mm sheet stuff is fantastic stuff

I reckon if I chuck a big fat blanket over top they should hold temp for 90 mins ... especially if I start a bit warmer .any way planing a test brew . Will update !

The results are in ! Started at 67 degrees because I thought it would drop a few .Put thermowrap on top of grist and a sheet over lid and under tun . Big thick blanket over the lot 95 minute mash 67 degrees at end ! I reckon the beer will be on the sweeter side so I’ll do a forward hopped IPA . At least I know it retains the heat well .... might not need blanket ??

I only lost 0.5C in my mash today using two blankets around an uninsulated boil kettle. Most I’ve lost is 5C with no insulation.
Top
Post Reply
12 posts • Page 1 of 1