A forum for those who boldy recirculate where no man has. .... you know the rest
Post Reply
17 posts

Just received this detachable temperature probe from eBay, shipped from China. It was less than a £10 delivered. I've tested it with my pid and it seems to work perfectly. It will be handy when cleaning out pots etc :)
Thought I'd share it for anyone interested. Good find!
I have ordered one to replace my fixed PT100 probe in my boiler.

Ive been looking for these for ages , saw them on a post and then couldnt find it . Thanks

did i miss the all important link??

after snagging the probe leads a few times during clean up and put away, so was planning to switch to thermowells ..
ist update for months n months..
Fermnting: not a lot..
Conditioning: nowt
Maturing: Challenger smash, and a kit lager
Drinking: dry one minikeg left in the store
Coming Soon Lots planned for the near future nowt for the immediate

ebay item number at the bottom of the op
Top

Haydnexport wrote:ebay item number at the bottom of the op

thanks i had missed that

I've given up with "connectors" I've tried a few types and they worked at first but a few batches later and they failed.

They always give repeatable connection!

Gordito, wondering how you're getting on with this probe? I've purchased a similar one which should hopefully arrive by Saturday (UK-based seller, but same item). Is the seal ok? (assuming you've used a BSP nut as I intend on). Thanks.
Top

I bought a few of these.

The 1/2" thread is watertight with a few turns of PTFE.

I did find variations in the ohm value at 0 degrees.

Been testing them out on an Arduino Uno and an LM358 circuit with 31.57 gain.

Cheers brewzone, was a bit difficult finding an answer whether NPT and BPS threads were interchangable (or more accuratelt whether it would provide a decent seal) seemed that 1/2" fittings were but good to get some confirmation.
Top

Ohm value shouldn't be an issue on say a sestos or Rex c100 when calibrated for zero C.

Arrived today after ordering Wednesday, paid a bit more from one of the UK based obviously Chinese shops. I have an Inkbird 100, will let you know how it fares.
Top

I have been using one of these for a few months and its excellent. I tested it against 2 thermometers and a 10" SS probe on an STC1000 and its spot on. Have not had to calibrate it.
Top

I may have to order some of those. It the moment I changed the connector at the end to xlr connectors so I can jyst plug them into the wall outlets, but detaching at source looks a much better solution

Been a few months now since I posted to this discussion.

Bought a couple of these PT100 probes and set out to build a dual PID system around an Arduino Mega and RPI3.

Initially I used a diy opamp circuit to connect the PT100's to a UNO but found there was not enough resolution.

Have since bought some MAX31865 amplifier boards which are great.

After a few trial runs on a 33L test system overshoot is down to 0.67C

Running in a simulation this is down to 0.04C

Just got to sort the lag out to achieve the 0.04C on the 33L system and then incorporate this into a RIMS and Herms system. 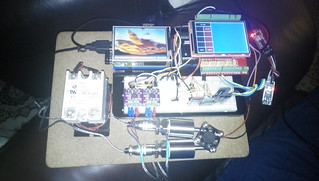 Return to “RIMS and HERMS”