Which effect are you referring to, exactly?

No back pressure.
Top

- How does the resulting beer differ between the re-pitched stuff and the initial fresh pitch from a regular starter that you use to seed the system ? I’m just wondering how much change is due to the Yorkshire square recirculating the yeast/wort and how much may be due to selection in subsequent yeast generations.

- The 30L Speidel fv you used originally is actually 35L, is the 30L kegmenter smaller in terms of real volume? I see that the “square” still “seems” to be 15L, does this give a better ratio between the two vessels (eg to contain the yeast)?

- Does the fv/kegmenter need fully filling for it to work effectively and have you tried different volumes?

- You seem to have used two different pumps for the two setups, what are they and any issues with sanitation/cleaning them?

The beer actually gets smoother and more balanced, to my taste, with some appealing complexity. Beers continue to drop bright easily. I don’t think there’s much selection going on apart from for active cells, young to genetically stable. I don’t see selection going through a 'narrow bottleneck' here, as so much yeast collects in the yeast trough. In fact, it seems to produce more yeast biomass. I need to quantify that at some point, but a bit difficult now I’m fermenting almost exclusively with the Square for my English beers. Definitely an improvement in fermentation performance and need to close to naturally carb by the end of day 3 at the latest. I don’t repitch beyond 5 brews at most, because I tend to move on to another yeast strain more than anything else. Need to decide on a strain before assessing things long-term. And empty all my kegs, I guess.

Checking my notes, the Speidel 30L FVs are just under 34L to the brim. Thats based on weight of cold water. Can’t see it reaching 35L at RT. Kegmenters are just under 31L to the brim. Dead space in the trough is slightly less than 2L. It usually contains the yeast, if cropped at the right time, otherwise it can escape to a small degree. I’d like to try a bigger pot, tbh. They’re very cheap on eBay, so I might try a 20L. Should have seen my wife’s face. She said “That’s a nice big pot. Should come in very handy.” Then she watched me drill a big hole through the bottom of it. “Not anymore, love!”

Yes, needs to be filled ideally. I aim to get 33L out of the BM, to fill the FV and just cover the yeast hole. Need to push an envelop or two, to take the BM to its limit. This is final top-up at the end of the boil:

I think with less volume more yeast collect in the FV, slowing grain-to-glass time without automatically capturing loads of healthy yeast in the trough. Ideally the trough contains the bulk of the yeast head. Apart from maximising beer volume by about 1.5 times more than a standard batch, it keeps the FV pretty free of crud and easy to clean.

I’ve used 3 pumps so far. A small solar pump, MP15M and Riptide. I’ve had a couple solar pumps seize up so don’t bother with them anymore. I use the MP15RM mainly, because the RipTide is required elsewhere more often. No problems cleaning the MP15RM. I usually just transfer the pump to a fresh FV without bothering to clean it in between and haven’t noticed any issues. Figured as I’m transferring the yeast trough to a fresh FV, if there was an issue, it wouldn’t be the pump necessarily, although it does get a good clean every 2-3 batches. Transferring the trough (full of yeast) to the next batch is dead easy. I only crop and store if there’s going to be several days before I brew next.
Last edited by McMullan on Mon Apr 12, 2021 12:03 pm, edited 1 time in total.
Top

And what about priming/cavitation issues?

Priming the pump isn’t usually a problem. Generally primes (by gravity) as the valve opens. If it fails, I’ll just suck it through using a sanitised length of 3/8 JG tubing stuck into the disconnected silicone hose. Cavitation hasn’t been an issue, although CO2 gas can evolve (post impeller) for the circulating fermenting wort once things have taken off. Doesn’t seem to be a problem, though. Sufficient force to mix things up is maintained and pump remains primed, being well below the wort level.
Top

In order to fix all this in my mind it would be good to see a video with explanatory voice over.

This was Sam Smith’s oatmeal stout. The young man is Sam Smith III.
Sommeliers recommend that you swirl a glass of wine and inhale its bouquet before throwing it in the face of your enemy.
Top

I have to agree, the aroma especially from a fermenting porter/stout is wonderful. You could bottle it. It would sell.

This was Sam Smith’s oatmeal stout. The young man is Sam Smith III.

Yes indeed. Trefoyl took the pictures, the "Ooooh" at the begining is from his wife, the lady in the foreground at 40 seconds in, is my wife and I'm the old bald headed guy between her and Sam Smith III. Basically 23 litres of wort cannot be readily fermented in a 30 litre vessel with a Yorkshire yeast.
Without patience, life becomes difficult and the sooner it's finished, the better.
Top

Interesting to see the 'fishtail' in action here. Looks like wort is directed directly at the yeast hole, but, due to the fanning pattern, likely disturbs yeast settled in the square too. Hence the fishtail design, I guess? Another project/experiment added to the list.
Top

I have pictures of the empty fermenters I’ll have to share from my home computer. There is one on my Flickr page that shows the attemperator pipes 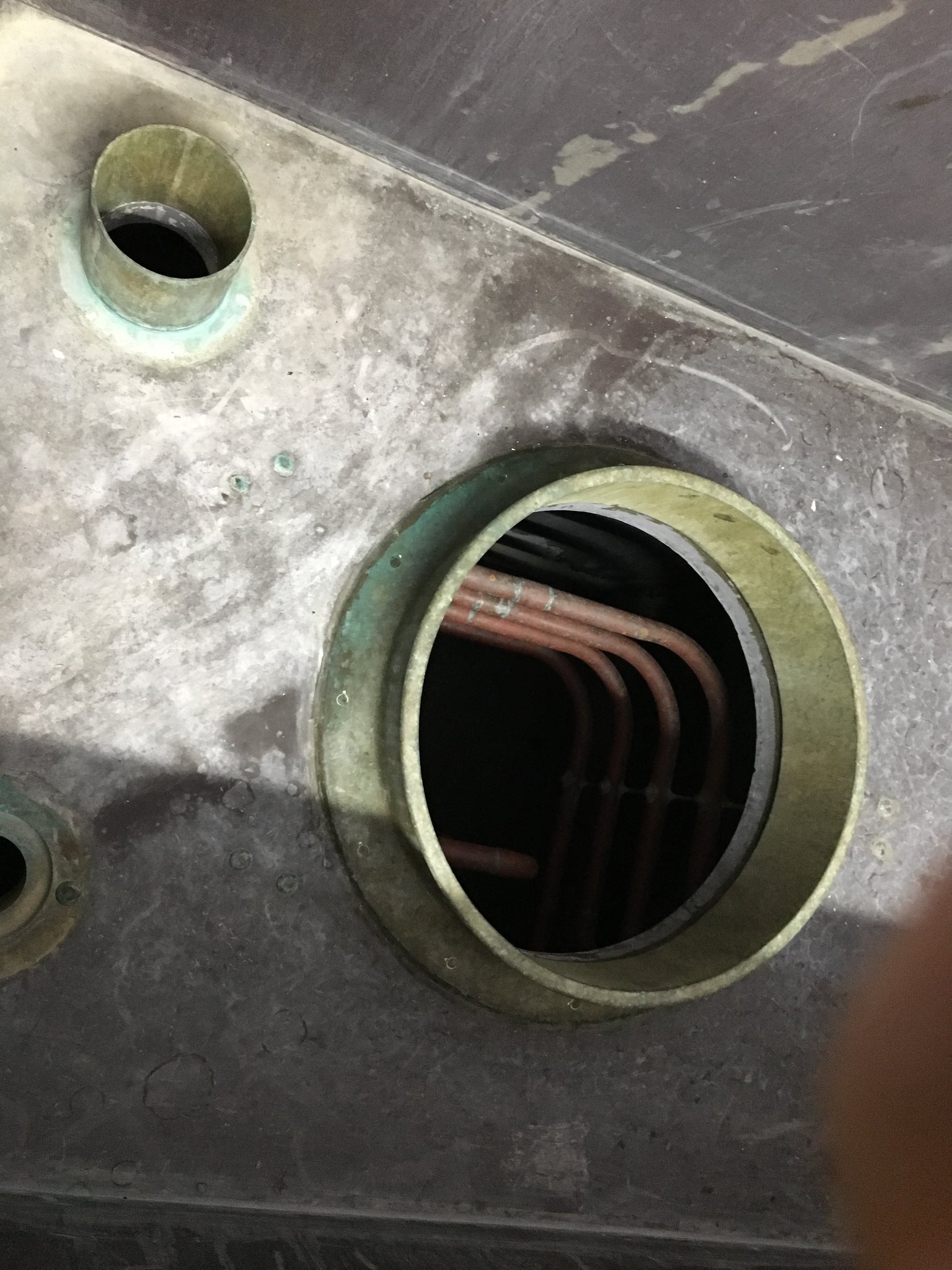 Trefoyl wrote: ↑
Mon Apr 12, 2021 5:21 pm
I have pictures of the empty fermenters I’ll have to share from my home computer. There is one on my Flickr page that shows the attemperator pipes

That's a decent size and proportionally much bigger than my yeast hole.

For temperature control I've got a thermowell in the wort.
Top

A person used to have to climb through the hole to clean but now they have a CiP system.

In the literature it's sometimes referred to as a 'manhole'. I'll stick with the 'CIP'. Otherwise I might risk getting stuck in mine.
Top

I’m guessing it’s was the skinny newbie’s job prior to them putting on a few pounds in the old wet breweries.

A few weeks ago I was inside a firebox of a Case traction engine but you go in from the bottom where the grates would go. The Baker engine being cleaned at the same time has a boiler that surrounds the firebox, called a “wet bottom” fire box. Funny name

and the fire hole is the only way in or out. They had a volunteer and wouldn’t let us newbies do it. I thought it might require a Confined Space Entry permit but apparently that’s only if there was a chance of asphyxiation or getting trapped by something inside. I was glad I wasn’t asked.
I guess the reason I’ve seen signs on brewery equipment is because it could contain C02 or other fumes.
Sommeliers recommend that you swirl a glass of wine and inhale its bouquet before throwing it in the face of your enemy.
Top
Post Reply
59 posts