For a recent birthday, some friends bought me a kilner drinks jar: 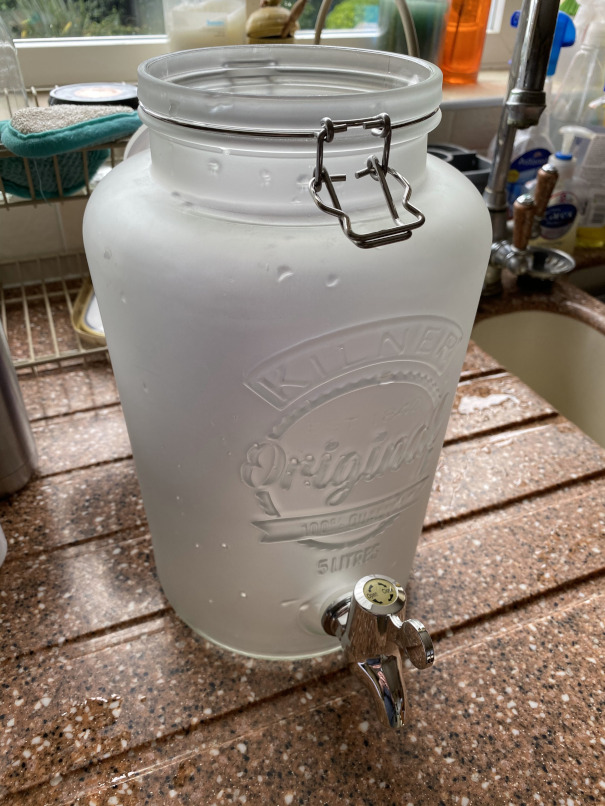 So I got thinking and decided to give kombucha a go. Following the instructions that came with my scoby, I put 8 teabags and 170g of sugar in 2 litres of boiling water: 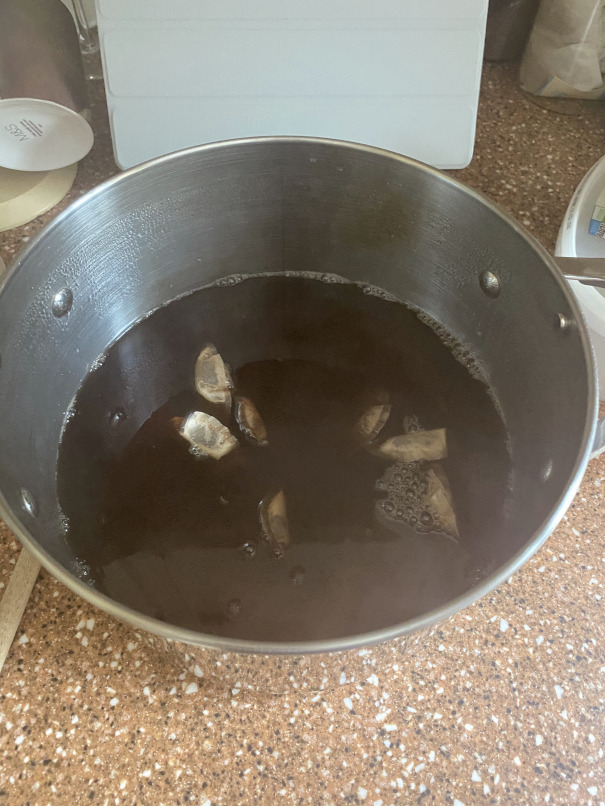 After half an hour of steeping, fished out the tea bags and then left it to cool for a few hours.

I'd bought a mis-shapen scoby online, they're cheaper (and really does the shape matter?!). Once the tea was cool, it was into the kilner jar for the cold tea mixture and the scoby: 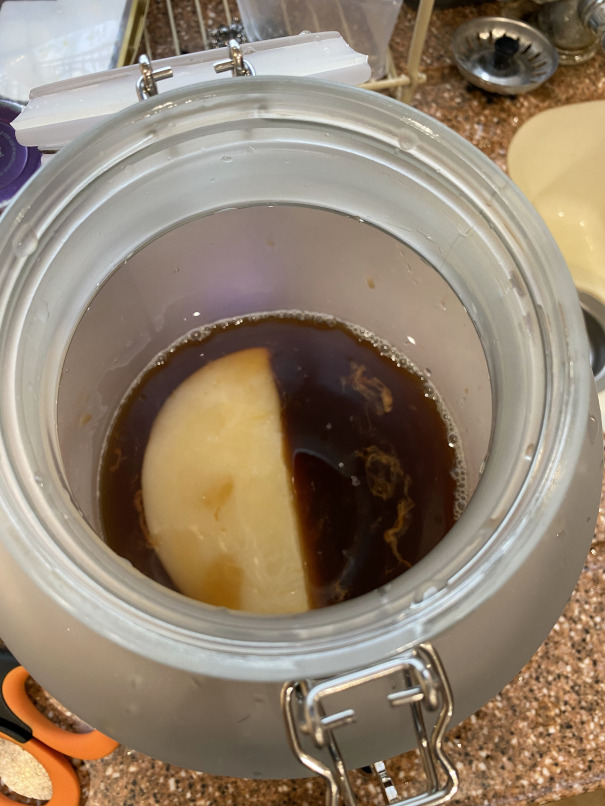 So now it is sat in the utility room, covered in an old tea towel. After 5 days I'll try it: 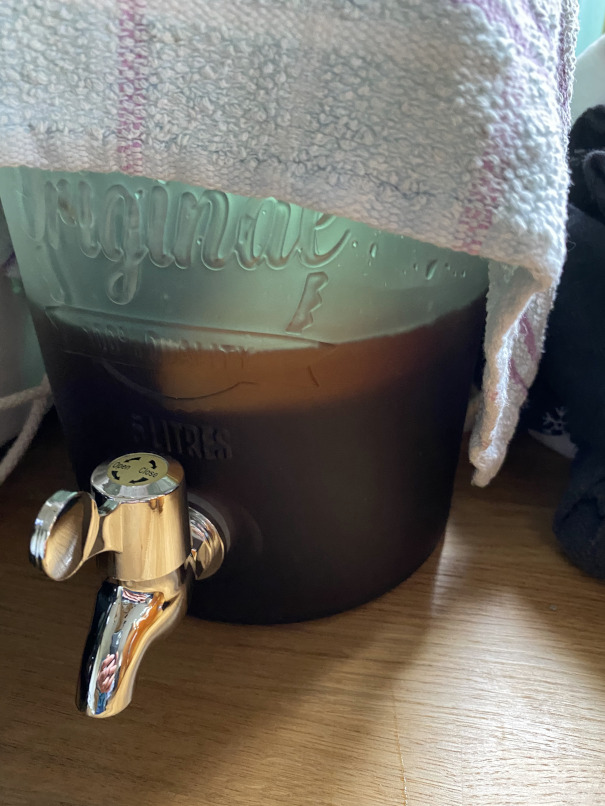 Next step, it is bottled!

At last a use for my clear, screw top, bottles. 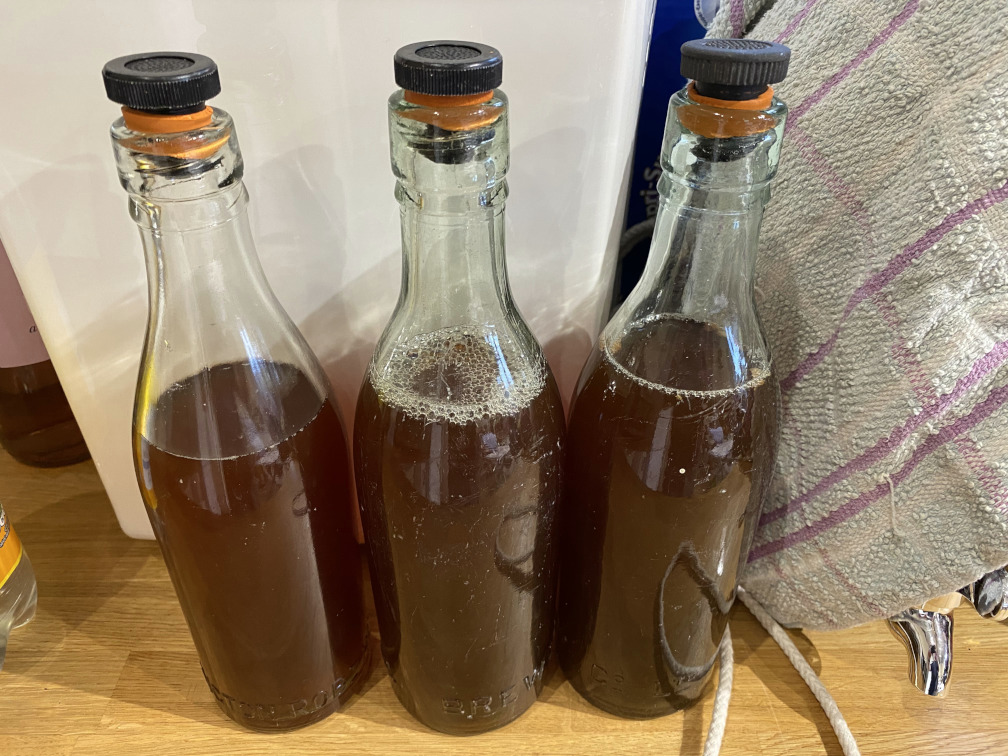 I've tried it and it is quite sharp. I hope it's an acquired taste

Love this. You can always add a 1/5 to a 3rd of a bottle of your fruit juice of choice to keep the fermented goodness but more of a soda taste.

Thanks Bryan, that's a good idea, as whilst it's a nice drink it can be a bit raw, especially when young (more than a bit of sulphur).

How do you use the hibiscus, is that dried flowers, syrup or an infusion of some sort?
Planning: Summer Lightning, Election interference Russian Imperial Cocoa Stout
Fermenting: Nothing beery (there is a kombucha going though)
Conditioning: Nothing
Bottled (Drinking): Exmoor Autumn Glory, 1936 Mackesons, Weissbeer

I had overbought hibiscus flowers when making a saison so thought i'd use them up. Just enough to cover the bottom of the bottle with whatever juice is in the house at the time.
When I'm particularly lazy I dont even bottle the batch. Just sticking down the lid on and dispensing from the tap. Even the basic wilko beverage dispenser seals enough to give it some fizz.

Forgive the high level of hipster but this video has some interesting ideas on what to throw in.
[youtube]https://youtu.be/8SOPeZWkc1k[/youtube]

Thanks, I’ve taken to mixing it with orange juice as I drink it - very nice. I will try bottling with juice too - a chance to be creative working out what’s good. I’ve upped my brew length to 3 litres now, so enough to experiment.

The sulphur does seem to disappear after a couple of days in the fridge, would be good if it wasn’t there, but at least I know it passes.

My dispenser doesn’t seem to hold pressure at all, not sure if I need to fiddle with the seal.

My supplies from http://www.themaltmiller.co.uk
Top
Post Reply
6 posts • Page 1 of 1

Return to “Kombucha, Kefir And Other Non-Alcoholic Brews”