decided now is the time to make a Pumpkin beer. Being a bit tight i thought all the shops would be selling off thier remaining pumplins cheap at the weekend, but no! All sold out

Cut it into eight pieces, scraped out all the seedy stuff and baked in the oven for 2 hours at 350 degrees to caramalise it a bit and drive out some of the water. 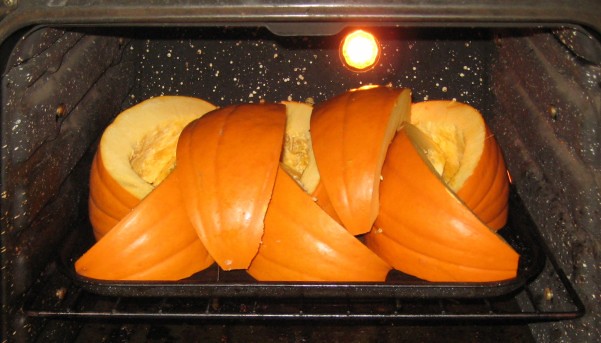 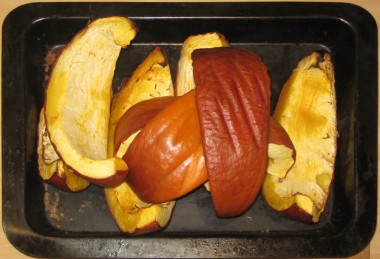 Then scraped out all the flesh and chopped into pieces. These were put in the mash with a fairly regular grain bill (pale, munich, brown and roasted malts, with a little wheat malt for head).

Mashed for nearly 2 hours to give those enzymes from the malt time to get into the pumpkin:- 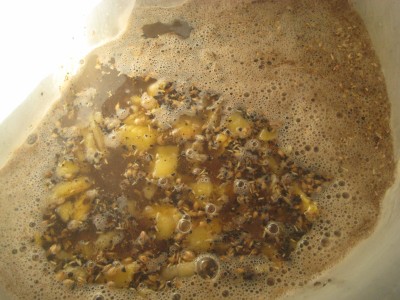 Lifted the bag, which was quite a strain as the pumpkin/grain mix seemed to be very good at retaining the water,it was damn heavy, not sure if my ceiling hook was going to take it. Hung the bag over the boiler for nearly an hour to drain, even squeezed it at the end to get the most out of it.

After that 90 minute boil with some fuggles and then at 15 minutes added chiller, half a protoflock, 2 cinnamon sticks, some nutmeg, some cloves and a vanilla pod. Ended up with 22Litres in the FV at 1.053. Pitched with US-5 and now waiting for the bubbling to start. Hopefully this will be a nice drink for Christmas.
BIAB Bags from http://brewinabag.co.uk
Top

Looks great! I've had some interesting fruit/squeezing experiences myself. For the record, pears turn to total mush. Good luck with it!
Top

Just wondering if you've had any yet and if so, how did it come out ?
I love pumpkin ale (and pie, pancakes, buns etc) - had a load at the Wetherspoons beer festival in October.
Top

Coincidentally, I had some in October at Weatherspoons, which is what prompted me to try making some.

I've tried a couple of half pints this week, rather nice and christmassy. 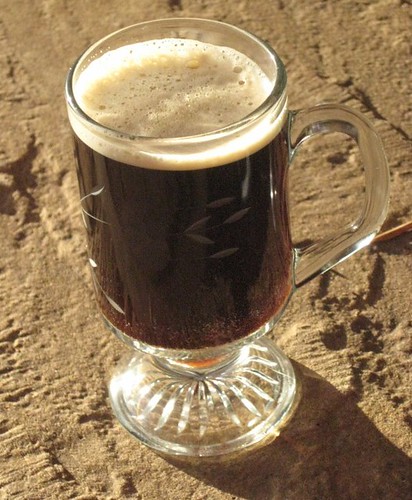 It is very close to what I was hoping for, barely noticable pumpkin flavour though. I think I overdid it with the cloves. Cinnamon is there, vanilla also, and a little to strong on the clove flavour, hinting towards toothache tincture. Next one I do I'll prolly use just a half flat teaspoon of ground clove, other than that it's very pleasant and will certainly nearly all be drunk by the end of this month. I'm going to bottle a dozen bottles as giveaways or for keeping till easter maybe. The keg will be sipped at gently 'til empty.
BIAB Bags from http://brewinabag.co.uk
Top
Post Reply
4 posts • Page 1 of 1

Return to “Brew in a Bag”