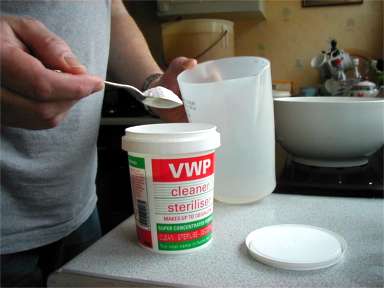 Home brewers seem to have difficulty with the terminology on this one (as do the manufacturers of sterilising products in some cases!) - we all know what we have to do, but we can't seem to agree what to call it!  To help, a list of commonly used terms with a strict definition of each is included at the bottom of this page. However, I think it's fair to say that when home brewers say 'Sterilise' what we actually mean is either 'Sanitize' or 'Disinfect'.

Sanitising and disinfecting are different from cleaning; and involve rinsing the equipment in a prepared solution which is designed to inhibit the growth of bacteria and yeast.

Two main types of product available to the homebrewer are: -

Of the two, I would recommend chlorine-based disinfectants, as they are more effective against wild yeasts, and actually kill them, rather than just inhibiting growth (as sulphur dioxide does). NOTE: equipment must be thoroughly rinsed in clean tap water after sterilising with a chlorine based product - otherwise it will get into the brew, which can not only cause a health hazard, but also inhibit the activity of the brewing yeast.

Many brewers use household bleach as a chlorine-based brewing disinfectant, but you need to make sure that it doesn't have perfume added (might taint the brew) and that you know the chlorine content and therefore how much to dilute it to get the correct concentration for disinfecting brewing gear. If you aren't confident about doing that, I would recommend buying a commercially available one, especially if it is combined with a cleaner (which saves a lot of work!).

I usually use VWP Cleaner/Steriliser, which comes in the form of a white powder which you dissolve in water.

No rinse sanitisers offer the advantage of speed and convenience and are very popular with home brewers (as they are in commercial brewing for the same reasons). No rinse products often used by home brewers include: -

Sanitizing is the reduction of micro-organisms, usually with heat or chemicals, to a point not considered harmful to humans. It does not guarantee a kill rate of 100%, but rather to a level around 99.9%. The products for sanitizing are often no-rinse at proper concentrations.

Disinfection is a reduction of micro-organisms to a minimum kill level of 99.999%. The chemicals used in disinfection are often not safe for consumption, requiring a rinse after use.

Sterilisation is the complete inactivation of all micro-organisms: fungi, bacteria, viruses and spores. Steam requires a minimum of 15 minutes at 121C or 3 minutes at 134C. Dry Heat requires at least 2 hours at 160C.